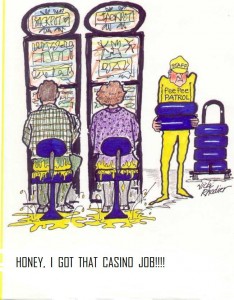 http://asylumeclectica.com/asylum/morbid/archives/morb0897.htm
August 17, 1997
Disgusting Fact Du Jour: Operators of the Casino Niagara in Niagara Falls, Ontario, told the Ottawa Citizen in April that customers’ urinating around slot machines has become a severe problem. (Reluctant to leave a machine that they are certain will soon pay off, some customers urinate into the plastic coin cups supplied by the casino, some wear adult diapers into the casino, and some merely urinate on the floor beside the machines.) Now, that’s what I call addiction.

Floyd Kibiloski was playing video poker at the Caesars Indiana casino last month when he decided to try his luck at the machine next to him – and got an embarrassing surprise.

Kibiloski, a Fern Creek, Ky., computer consultant, sat in a chair soaked with urine, apparently left there by a woman who had been playing at that slot machine moments earlier. It was dripping off his shorts and down his leg.

He said the reaction from Caesars left him even more embarrassed. He said he got no help trying to find a place to clean up and had to walk in his dripping shorts to his car to get an old pair of sweatpants to wear.

And another casino patron who sat there after him, he said, also got wet.

“My whole concern is that they fix this,” said Kibiloski, 60, who filed a complaint with the Indiana Gaming Commission. “It’s not apparent that they have anything in place to deal with this kind of situation.”

Caesars spokeswoman Judy Hess last week acknowledged the incident and said the casino regretted what had happened. She said they “dropped the ball” because they have a procedure to immediately remove broken and soiled chairs from the gaming floor.

The kind of problem Kibiloski faced, while it doesn’t occur every day, is not uncommon at casinos where aging patrons may suffer from incontinence or are unwilling to take a break when they’re hoping to win a big jackpot, say researchers and counselors who work with problem gamblers.

Compulsive gamblers sometimes wear adult diapers to avoid having to leave a slot machine or gaming table where they expect a payoff, the experts say.

If they don’t come prepared, they sometimes “just pee in the seat,” said Arnie Wexler, a recovered gambling addict who operates a gambling hotline and counseling service in New Jersey. “It’s not something the industry really likes to talk about.”

Wexler said all the major casinos have “seat changers” – a cleanup crew that removes soiled chairs and replaces its cushions. “I’m not sure the little casinos all have it, but it’s not an uncommon thing in the gambling industry at all,” he said.

Angela Bunton, who reviews patron complaints for the Indiana Gaming Commission, said she believes similar issues have “come up a time or two” at Indiana’s 11 casinos but that she couldn’t specifically recall one. Complaints are kept on file for only a year.

Their reasoning is so impaired by the addiction that they may go for hours and days without eating or showering, O’Hare said. In some cases, such gamblers have told counselors later that they’ve relieved themselves to keep from losing their seat at the slot machine, she said.

In Kibiloski’s case, no one could offer an explanation for the soiled seat.

Kibiloski, who said he visits the Caesars and Belterra casinos regularly, said he arrived at Caesars about 6:30 p.m. on July 15. After he realized he’d sat in urine, he tipped the chair against the machine and went to his car to get the sweatpants, which he put on in a restroom, according to his complaint with the Gaming Commission.

But he still felt like he needed to shower to “get the stuff off me.” The complaint said hotel employees who checked with supervisors refused to allow him to use a hotel room to take a shower. He was eventually given a towel, soap and washcloth to use in the restroom, the complaint said.

Kibiloski, a retired Air Force veteran, also said he was assured by a casino host that the chair would be removed. But before driving home, he said, he asked employees near the area if they had removed the chair and was told they were unaware of a problem.

When they asked a woman playing at the machine to allow them to check the chair, the unidentified woman’s white slacks were moist in places, Kibiloski said.

He said he received a phone message from Ed Garruto, the former general manager of Caesars, a few days later apologizing for the problem and telling him to contact the parent company’s claims department in New Jersey.

When he did so, he said, a Harrah’s official in New Jersey was sympathetic but told him that unless he contracted a disease or illness, the company couldn’t do anything for him. The representative offered to pay to have the shorts cleaned.

Kibiloski said he has kept the soiled shorts in a bag in case any health problems arise.

It’s unlikely that someone would contract a disease or illness from such casual contact, said James McGlothlin, a Purdue University associate professor of public health who was told about Kibiloski’s complaint. Urine is sterile, and in most instances the worst consequence is skin chafing, he said.

Indiana Gaming Commission spokeswoman Jennifer Arnold said the agency contacted Caesars executives after receiving Kibiloski’s complaint and will follow up to ensure that the issue is settled.

Hess said that Caesars acting general manager Neil Walkoff spoke with Kibiloski after learning of the situation and that the two resolved the concerns.

“We’re not happy when we have someone go away and think we don’t care, because we do,” Hess said.

Kibiloski said last week that while he accepted Walkoff’s apology and an invitation for a complimentary overnight hotel suite at Caesars and dinner with a guest at its Portico’s restaurant, the casino’s suggestion that all is well is overstated.

He has asked the gaming commission to ensure that Caesars redoubles its procedures so no one experiences what he did.

“It was an ordeal,” Kibiloski said. “Nobody should have to go through that.”